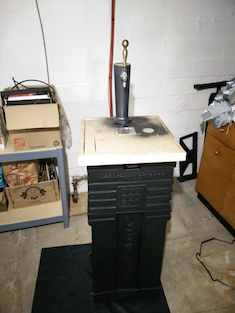 The top is pretty much assembled at this point. I got a drain for the top to act as a “drip tray” down into the base. I also went ahead and changed out the tap tower. I think that while the tube didn’t look aweful, especailly after I painted it, it wasn’t really quite the look I wanted. Also, and almost more importantly, securing it had turned into a nightmare.

It’s hard to tell in the picture, but it also needs another coat of paint in a few places. Especailly on the top half, but I think the paint it’s got now looks pretty good. A bit more and it’ll be great.

Inside there are still a number of pieces to work out. Primarily: Where will the gas line come out until I replace the line with a small tank, How will I insulate the beverage lines, and what do I want to hook up to the drain.

For the beverage line it’s a little less clear. I have some insulation around, and I have some foam I might be able to use, but the big problem is the breaking point between the top and the bottom. If I want the hinge to work so the top is still openable, then I might need to split up the insulation. I might have some pipe insulation that’ll hold it’s shape well enough.

I’ve given the drain a lot of thought. Originally I was going to just have it drain into the convenient basin on the top, but I think I’m going to want that space for more than that, so I’m thinking that I’ll want to probably find something else. I’m thinking either a bottle, hooked up to the drain, or a tupperware sort of thing sitting in the current basin. The advantage of the bottle is that it’ll seal and if it fills up it’ll be visible in the drain. But the tupperware would be easier to implement.

On the outside, Courtney is still getting started on the mosaic, so no news there. We’re supposed to bring this thing to a party this weekend, so I guess we’ll have to get it all together pretty quickly.