The Insulation step went pretty well I think. Things that I learned. Styrofoam cutters are a thing. They sell them on amazon for ~$15. 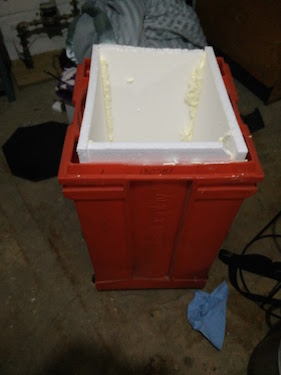 I think that if I could go back in time I’d think about buying one, especially since I’m thinking about doing more stuff with foam in the future. The advantage is pretty clear to me. Primarily, being able to cut accurately without leaving a bunch of particulates around on the floor. Oh well, next time.

All in all though, It came together okay. It’s not pretty to look at, but nobody sees the inside anyway. I haven’t gotten a chance to see if it leaks too much. This is important if i want to keep a party keg inside for the winter months. If it does leak, my plan is to just use more expanding foam until it doesn’t anymore… That’ll work, right? If it doesn’t, I’m going to try sanding down all of the seams and spraying them with plasti-dip. 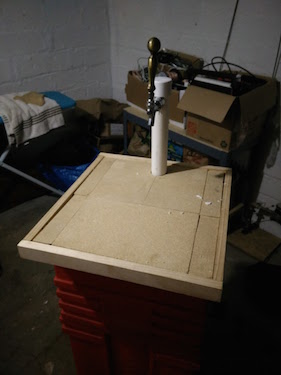 I also got a chance to start on the top. We’ve got a keg for my friend’s housewarming party in two weeks, so I’m feeling a bit of a push to really get it done. It really doesn’t look like much right now, but a bit of paint and courtney’s hand at tiling the top, and I think it’ll look pretty nice when we’re done. The tower is still a bit unstable and I’m going to add a drain in the middle.

Courtney tried to talk me out of the drian, we don’t have on our normal kegorator, but I think in a lot of ways, it’s much more important at a party. Two reasons: 1) We’re drinking more at once. If you’re drinking a keg over a few weeks, it’s not a big deal to just wipe up any dribbles from the faucet, but when you’ve got a few dozen people and you go through a whole keg, it really can get gross. 2) We won’t be doing most of the pouring, and having a party item like that just invites people to mess it up and pour the beer everywhere. Plus it already has a convenient catcher under the top.

Next step is finishing up the top, the sooner Courtney can start tiling it, the better off I’ll be. She takes a bit longer with her art, though the wait is definitely worth it. If she had to do it all in a couple of days, she would, but it wouldn’t be quite as good.