Once upon a time, built a kegorator. It was a fun and interesting and it’s continuted to evolve over time. At this point, however, I’m basically to the point with it where there isn’t much more that I want to do with it. There isn’t any more space for kegs, I could add a second regulator, or convert a tap to nitro, but I don’t feel like I need it, and with only 3 kegs in there a nitro tap feels extravagent. 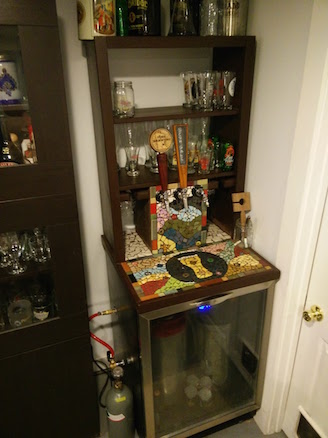 One thing I do occasionally have a need for is a portable serving solution. At the moment, I use a picnic tap and a quick connect on my co2 tank to bring it places, but it’s an anoying time, and I still have to have a bucket of ice at the destination to keep the beer cold. There are several less than ideal factors here.

So, I have some requirements:

So, how should I accomplish this? My first attempt ended a dismal failure. 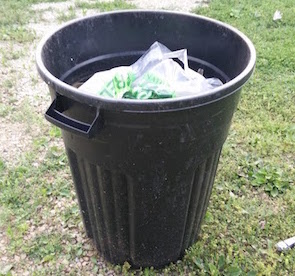 I bought a trash can with a lid from the hardware store and tried putting a tap tower on it. It was big enough for the keg and the co2 tank so it seemed good. But the lid was so flimsy so the attached tap tower would actually flex the top of the lid if you tried to pour from it. It also looked like garbage. Eventually, we needed a yard waste bin and it was nearly imediately sacrificed.

That was almost a year and a half ago, and I’ve been thinking about it since then. A few days ago, i was at Ax-Man in St Paul. If you live in the twin cities area and you haven’t been to Ax-man, you’re missing out. It’s an experience in and of itself. They’ve got motors, wires, beads, casters, random electronic components, and a whole lot of other random stuff. They’ve even got an iron lung (though I don’t think it’s for sale). While I was there I found this gem. I think it was originally designed to transport endcap signage for a store or something. 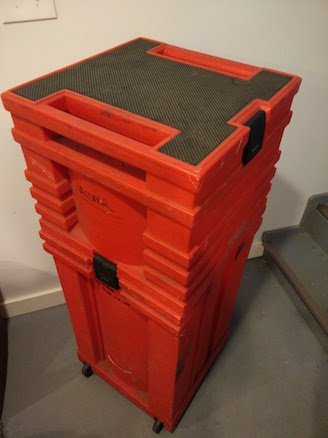 It has a few features I care about: It locks shut with a combo lock that I actually know the code to. It is just big enough to hold both a corny keg AND a co2 bottle, meaning it can hide all of the stuff. It has casters that would let me roll it around. It’s top is just about bar height.

Since I don’t want to blow the bank on this, I’m going to break it up in to phases, mostly around adding new co2 hardware. Unfortuneately while it has space for both tanks while it’s EMPTY, I’m going to add some insulation and make it hold water so that when I add ice it won’t A) melt immediately, and B) leak a bunch of water out on the floor if i want to use it inside.

Step one is insulating. Since the inside is pretty big (and I’m not trying to fill it up with a bulky CO2 canister anymore, but I’ll come to that later), I really want to fill most of it with foam. My choice for this is polystyrene insulation for two reasons. 1) It’s waterproof. 2) It’s cheap. Our local Menards has it for ~$2 for a 14”x3/4”x8’ sheet. Three of them should be more than enough to build a box inside. Then, I’ll use spray foam on the edges so that it makes a really good seal around the whole thing, and maybe fills up a little space into the weird edges of this box.

From there I’ll drill a small hole in the bottom and feed a co2 line through. Short term, even though it’s one of my stated end goals, I’m not going to hide the co2 tank. While it does look jenky, Courtney pointed out to me that most people end up playing with it because they don’t understand the picnic tap. I think she might be right, and since it means keeping the beer a little colder, I’ll go for it for now.

After that’s done, I’m going to try and figure out a little insulation for the top, that’ll probably just mean having the walls stick up into the lid and then a cover with holes for the hoses. Hopefully this won’t be to long before I send another update.