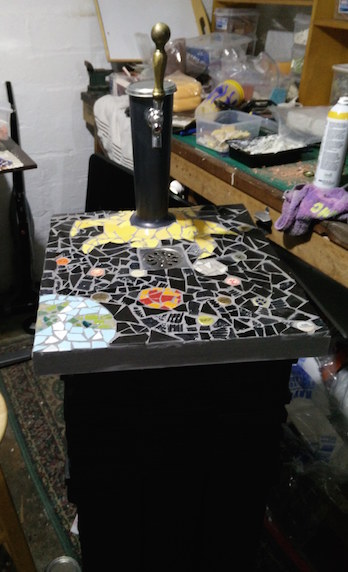 Well, it’s mostly done. Doneish, really. It was done enough that I was interested in taking it to a party. Which went quite well! There are still more things I’ll want to do with it, though I suspect it’ll be a while before I do them.

First thing I still want to do is add a second stage co2 regulator. It doesn’t solve the whole co2 issue yet, but it helps. Plus, since I want to add a small co2 bottle, like those used in airsoft and paintball, having a second stage there means I can just hook into it later. I guess that’s two things.

More decoration wouldn’t be amiss. I like how the black looks, but it was pretty easy to scrape off the paint while loading and unloading the thing. So I’ll need to figure out either something to coat it, or something else. There’s still the raised lettering that I’d like to get rid of. Probably with some sort of countertop laminate I think.

I actually went quite well, despite the exposed co2 tank. With the tank on a long enough leash, I could hide it in the bushes behind the tower and nobody noticed it. So, win there. People were very impressed by the presentation of the beer. And the space motif that courtney did was pretty great.

The only snafu I had was when I tried to hook up the plumbing for the first time, instead of attaching the functional faucet, I hooked up the leaky one. So, yeah, that happened. Otherwise, the pumbing worked pretty well. Espeicially once I put the right facuet on.

When am I going to finish it?

I’d like to think someday soon, but we don’t have any more parties coming up, so probably it’ll be a while before I feel the pressure to.