After the last post I realized that I didn’t actually include any pictures. There is a perfectly reasonable explaination for that. My phone camera is totally busted and I’ve resorted to my iPad. I didn’t however have the pictures on hand when I actually wrote the post, and then it was way too late to include them. Oh well! 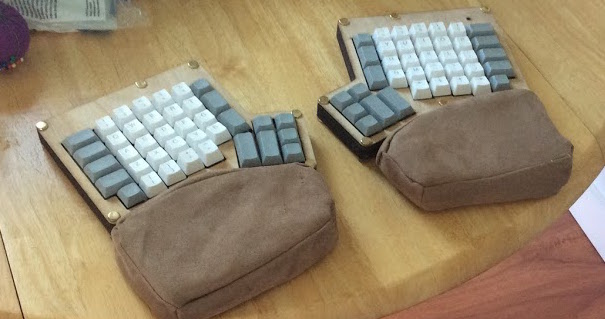 So, in my last post I talked about the need for wrist rests. Basically first thing I did the day after I wrote that was drive to Ax-Man Surplus and buy myself some random foam pieces. Open cell soft stuff for the top and a good hard closed cell for the base. I’ll probably replace it with memory foam on the top if I can find some to do so, but it works for now. Then last weekend I bought myself a really old sewing machine and sewed up a micro-swede cover for them.

I think the wrist pads didn’t come out too badly, a little uneven, but then I’m not particularly renowned for my sewing skills.

I also re-did the case a bit. Removed the ugly looking screws and replaced them with brass brads. Then covered them on the undersides with rubber feet.

I like the new keyboard, but there is one major issue. I’m having a really hard time switching between the ergodox and my laptop keyboard. I’m thinking about potentially a new design.